“Multi-Dimensional” Advertising for Building a Massive Following on Facebook 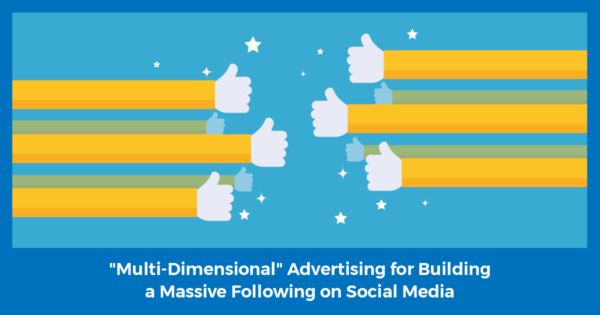 One of the pillars of success for today’s network marketers and direct sellers is to start building their own following using social media.

So if you’re posting updates to Facebook and hoping—fingers-crossed—that somebody actually sees them (and wants to sign up or join your deal), then this post is for you.

Because I’m about to show you how you can quickly build an audience of hot, pre-qualified prospects, in a predictable way, that you can actually control.

(All without breaking the bank.)

Okay, so what does “multi-dimensional” advertising even mean?

Well, if you’ve ever spent any time in the Ads Manager, then you might have noticed that…

In fact, there are a dizzying array of options in terms of what type of ads you can run.

However, despite how complicated it all looks at first glance.

Fundamentally, there are only…

Three types of ads you should (always) be running on Facebook

Now, the reason you should be simultaneously running three types of ads is because you have to take a more complex approach to advertising on Facebook, because it’s a social media platform.

And on social media, first and foremost, people are looking to connect with other human beings.

They’re NOT looking to buy anything.

They’re not even looking to opt-in or register for anything.

Honestly, they’re not actively looking for anything!

This is unlike when somebody goes to Google and says, “How do I do this?” or “Where can I buy that?”

People perusing Facebook are not looking for anything specific:

So, in order to effectively advertise on Facebook, you need to first build up rapport and desire.

How do you do that?

Well, first you need to create a…

The likes campaign might seem like a waste of time and money for some people who are first getting started.

We hear this a lot.

“Why am I doing this Likes campaign, it’s not leading to anywhere, is it just a waste of money?”

But here’s what you need to keep in mind, though:

You’re building a subscriber base!

This is similar to collecting email addresses.

With a Likes campaign, you’re building an audience of people who want to follow you.

So, when you run a Likes ad, you’re announcing to the world…

And, in response, people are saying…

“Yeah, that sounds interesting, I’d like to learn more!”

And you’re able to follow-up and promote to those people just like you would with an email.

A Likes campaign is all about building an audience.

Next, with a content campaign, you’re focused on spending a portion of your ad budget to deliver valuable information to as many people as possible.

And as a result of delivering value, people will interact with your content, and you can turn them into an audience to follow-up with.

So, even with your content campaigns, you’re building an audience.

If you’re familiar, a sales funnel consists of (at minimum) a capture page and an email follow-up sequence.

When somebody opts-in, you’re building an audience you can contact through email, and you follow-up via regular broadcasts or an autoresponder sequence (or both).

To add value you provide helpful, compelling information and hopefully your subscribers want to invest further with you.

Once you’re building your audience, it’s time to begin converting that audience into subscribers and customers.

And that conversion process starts with a…

A lead generation campaign is when your ad points directly to a capture page where you offer something of value in exchange for their contact information.

And once they subscribe, the goal is to get them to buy something from you through your ongoing communication and promotions.

That’s it—those are the three types of ads you consistently need to be running on Facebook.

Now, here’s an example of this strategy in action…

This process is why we do our daily Facebook Live, “The Daily Dose of Awesome”:

This is our vehicle for putting value out into the world.

We’re teaching people what we know.

Every single person who watches this video gets added to an audience inside our Facebook account, which we can then follow-up with.

This allows us to run ads that say…

“Hey, if you liked our Daily Dose of Awesome, check out this free report on how to generate prospects and leads using the Internet, and recruit through social media.”

This is what’s called a retargeting campaign.

And it’s extremely effective because you’re…

My friend Vince Reed calls this whole methodology an “ad funnel,” because as mentioned above, you’re turning your ads into a funnel in and of themselves.

What’s the advantage of this approach?

In case it’s not clear, you want to do this because it warms up your leads and and also builds a following you can tap into in the future.

So not only will you have your email list, you’ll also have your entire following on Facebook.

Once you have an audience, which you’ve built up over time, they’ll be receptive anytime you have something of value to share.

As a business that’s really good, because it can lead towards more transactions, more sales, and more subscribers for your email list.

You want followers who are engaged and don’t want to miss anything you have to share.

That’s why you need to have an “ad funnel”

So, to recap: before you run a conversion campaign that sends your audience to a capture page…

If I’m being honest, I resisted doing daily Lives for a long time.

I wanted some sort of guarantee that it would work; I didn’t want to be wasting my time preparing every single day.

But I made the decision that I needed to do it, and it’s now over a year since we’ve been doing these lives every single day.

And you know what?

My first Facebook Live only had six people on it!

Me, a “big Internet guru,” and only six people showed up!

“Wow, I’m supposed to be making millions on the Internet and I can’t even get much of a following on Facebook?”

But here’s the deal…

It takes time and consistency to build up an audience.

Because the audience following you through email or through another platform is not necessarily going to be the audience that follows you on Facebook.

So realize that it will take some time to build up your Facebook audience.

It’s vital that you always have something of value to share too.

So maybe you don’t want to create new content every single day.

Maybe you only want to create content once a week and then you need to promote it.

So let’s say you do a Live show, whether people show up or not, you need to promote it to your potential audience using Facebook ads.

Again, this builds rapport with those audiences, and you’re also building an audience of viewers, which you can then follow-up with.

That’s how we leverage our Daily Dose of Awesomes, that’s how we keep bringing in more and more people, and that’s how our audience (and business) continues to grow.

Don’t worry if somebody doesn’t show up, people will eventually show up.

The thing is, you have to do it.

And more importantly, you have to promote it, and then follow-up with lead generation.

Now, if you want to know more about building ad and sales funnels…

I invite you to sign up for my free online recruiting bootcamp.

You’ll find more nuts-n’-bolts training on how you can start using Facebook to grow your audience, and generate prospects and new recruits for your business.

In fact, I’ll share exactly how I passively generate 300–500 leads per day, 30–50 customers per day, and recruit 70–100 new serious business-builders into my business each month.

These are the exact funnels I’ve used to create a world-wide brand and over 14 million dollars in revenue.

And you too can use these same tactics to help produce huge results and change your life.

So if you’re ready to get started…

And if you found this content helpful, I would love to read your comments below!